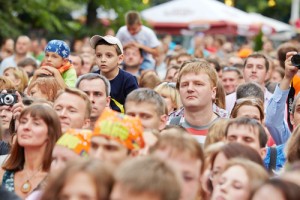 Every Monday, starting June 24 up to August 5, 2013, there will be Alpenglow free concerts in the park. Alpenglow Concerts are the favorite summer activity of many locals and visitors. This free outdoor concert series is celebrated every Monday evenings during the summer season. Enjoy the sounds of different genres of music, from funky blues to big bands at the beautiful town of Crested Butte, with a breathtaking Paradise Divide as the backdrop. The Alpenglow concerts start at 5:30 pm. Guests are encouraged to bring their own chairs, snacks, and non-alcoholic drinks. There will also be food and beverage for sale. Unfortunately, pets are not allowed during the event. Here is the line-up for this summer.

National Geographic recently featured the Alpenglow Concert Series brought to the people by the Center for the Arts. It is travel article entitled “Free to See: 20 U.S. Music and Dance Events. Crested Butte’s free concert series shared the spotlight with big players in big cities such as the Daily Kennedy Center Concerts in Washington, D.C., Metropolitan Opera Summer Recital Series in New York, Jacob’s Pillow Dance Festival in Massachusetts, as well as the French Quarter Festival in New Orleans. This year’s celebration of the Alpenglow Concert Series is already its 20th year of free music during summer. Every year, the series features more or less 8 concerts and more than 8,000 music lovers join the celebration at the park. Both the locals and the visitors mingled, danced, and sang with the wide array of music being played. The National Geographic article states that the music and mountain scenery are free of charge in Crested Butte.

History for Crested Butte’s Center for the Arts

In the year 1985, a passionate group of local residents started raising money for a community arts center. Two years later, they had raised an amount of $425,000. The old county road maintenance garage was renovated into its current state as the 6,000 square foot Center for the Arts facility. Today, it can accommodate 215 seats within the auditorium, with a stage, lobby, art gallery set shop, and two dressing rooms. The Center also comes with an attached outdoor stage. As of the moment, the organization is known to host different events in Crested Butte that highlights various forms of art. And one of its many successful events organized is the Alpenglow Concert Series for the summer. Every year, thousands of people look forward to the said event. &nbsp;

With so much to do in Crested Butte you will not know where to start. Enjoy the outdoors with hiking, biking, golf, fishing, rafting and much more!! Crested Butte CO Real Estate offers a wide variety of properties including ski in/ski out single family homes, ski-in/ski-out condominiums, lake and river frontage properties, golf course property, and true luxury mountain homes on acreage.  To see featured properties or search the MLS – visit chriskopf.com.  Contact Crested Butte Realtor, Chris Kopf  at: (970) 209-5405, or chriskopf@bighornrealty.com