Potential Sale of Crested Butte Ski Area Status – As previously reported there has been reports of a possible sale of the Crested Butte Ski area – CBMR confirmed in December that both the operations and the real estate was on the table. The rumored Buyer is Cypress Equities and Intrawest (who just completed an IPO (SNOW) of 18 million shares, and forecasting $17 per share would net them $300M, the stock launched between $11 – $12 per share) or about $185M). While some old timers have heard this before, and their response is “wait and see” – it seems like sage advice. All that is known is that there have been no announcements that the deal is off – so the speculation is that there is still negotiations going on. North Village For Sale – there are 255 Acres at the base of Snodgrass Mountain that is now for sale at an asking price of $12.6M. This land has been approved by the Town of Mt. Crested Butte for residential zoning supporting between 800 and 1,600 residences. This property referred to as “The Promontory” is being listed by a ranch broker on the front range (Mirr Ranch Group of Denver). Interesting that the property is now for sale in light of the possible sale of the ski area and all the real estate, and also that CBMR did not list with their own real estate office here in Crested Butte. Speculation as to why this piece is being carved out and why it is being listed for sale now are varied. Access to Snodgrass in Jeopardy – As John Norton so eloquently pointed out in his Notions column in the Crested Butte News January 24th edition – the unfortunate reality is that if a buyer were to purchase the 255 acre Promontory, they could cut-off access to the Snodgrass Trail, and access to the national forest land as we currently know it. Yes – if you ever parked at the Gothic Trail head and hiked, biked, snowshoed, or skinned-up past that old cabin structure on the right of the trail you were on the land owned by CBMR. So much has been made of the graciousness of the Allen family for seasonal access to the Snodgrass Trail – but nary a “thank you” to the Muellers and CBMR for trail access and Winter grooming. As a former board member on the Coalition for Lifts on Snodgrass – it is even more disheartening that the opponents to lift served skiing on Snodgrass may have put the nail in the coffin for not only lift served skiing – but access to Snodgrass and the national forest as we know it. Will the 2014 Crested Butte Real Estate Market Exceed that of 2013? 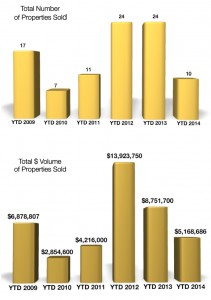 The 2013 Results were a dramatic increase over 2012 in many of the indicators in our Crested Butte Real Estate microcosm. The hope is that 2014 will match or exceed the results. Those are some lofty ambitions to exceed as in 2013 Volume was up 30%, Transactions were up 26%, and Average Single Family Home prices were up 8%. The number of luxury homes sold over $1M and the Volume doubled from 2012, and the Average Price per sq. ft. for Single Family homes in this luxury home segment also rose 13%. At $46.3M, the luxury segment represented 32% of the overall volume for 2013. As the current January2014 numbers show – the volume and transactions are down compared to the previous 2 years. The big story in 2014 may be that inventories have been dropping steadily for the past 18 months. Total properties for sale as shown in the MLS is at 625 – 158 Single Family Homes, 210 Condos & Townhomes, and 257 land/lots. Considering there were about 150 more properties for sale at the beginning of 2013 – it may be hard to match the 335 properties sold in 2013. Will the laws of supply and demand drive the prices up, and will we start to see more buyers move to build vs. buy completed homes…? Reflecting back on 2013 – The Total Number of Condos and Town homes Sold in 2013 rose to 146 compared with 114 in 2012, but Median Sales Price for Condos was flat (at $180,000), as was Price per sq. ft. ($213 vs. $208). Average Days on Market (DOM) for all properties Sold was 333 days, and 494 for Active Listing still for sale. DOM for luxury single-family homes (Sold Price &gt; $1M) is 1 year. Most properties are being priced closer to the Market and the market for Single Family homes is rising to meet the properties that may have bit a bit above the market a year ago. The Average Difference from Asking to Selling Price for all properties also shrunk to 7.6% (vs. 11.3% in 2012). Crested Butte Luxury Real Estate Market – Homes Sold for $1 Million + There were 2 homes sold for over $1M in January – one was a brand new single family home in downtown Crested Butte, the other was a Silver Ridge ski-in/ski-out condo at the base of the ski area. 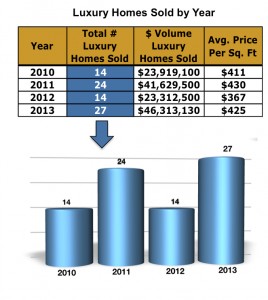 There were 27 Single Family homes Sold for $1M+ in 2013 – this segment of the market is similar to the totals recorded in 2011 – but double that of 2012. The average sold price for these luxury homes was $1.7M; median price of $1.44M, and Average Price per sq. ft. was $425. The average discount from Asking to Selling price was 8.17%. The Single Family Home Luxury Segment volume of $46.3M made up 32% of the overall market volume in 2013. Luxury Properties Under Contract in the Crested Butte Area – As of the end of January there was only 1 Single Family home with asking price over $1M under Contract – a Single Family home Skyland listed at $1.95M. There are two additional Riverfront Home sites Under Contract at Wilder on the Taylor. This represents the fifth contract and completes their “Founders Program”. Wilder has announced plans for a price adjustment in the Spring / Summer of 2014 for the remaining exclusive riverfront home sites overlooking the Taylor River. Not getting any younger – reflecting on the positive results from the Crested Butte Real Estate Market in 2013, some have suggested that there is a pent-up demand from the most recent recession. The demographic of our second homeowner population is a couple who is 50+ with a family, typically from Texas or Oklahoma and who been successful in business. Most hope to live into their 80s, but many come to the realization they may be running out of years to do the active things they have dreamed of while grinding in the corporate world, and/or building their business. What is Selling in Crested Butte? 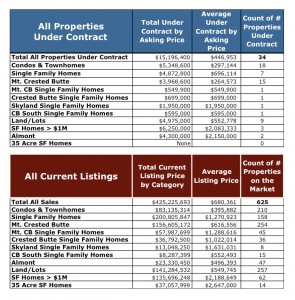 Under Contract There are 34 properties Under Contract (double from December 2013) representing a total volume of $15.1M. Of these properties Under Contract 18 are Condos/Townhomes,74 are Single Family homes and 9 are lots. As mentioned Active Listings have been trending down – there are currently 625 properties for sale representing $425M. Crested Butte Winter Ski Season 2013 – 2014 – Tourism an Visitors are the heart and sole of the Crested Butte area economy. The businesses at the North end of the Gunnison Valley all have reported positive results for the season thus far. CBMR has reported that revenues are up, lodging is up and skier days are up… all of this translates into more people visiting Crested Butte, our local restaurants and retailers which is great. Most people who visit Crested Butte for the first time come in the Winter skiing, and typically this is where their journey begins to explore the possibilities of buying a second home. As great as the Winters are here for skiing and outdoor recreation – the Summers are better. The Summers offer more activities, the opportunity to explore the many peaks, valleys, rivers, streams and trails. How can I help you?  This Crested Butte Real Estate Market Report and the level of detail is representative of what you can expect from me as your REALTOR®.  If you are interested in finding out what your existing property is worth – call me. Click these links to see the Full Crested Butte Real Estate Report – January 2014, and if you want to see the 7 Page .pdf Crested Butte Real Estate Market Report – 2013 in Review. Click here to do an advanced search the MLS for properties for sale in the Crested Butte area.   If you are considering me to represent you as a Buyer, I appreciate the opportunity to earn your business (or that of a friend you think I could help). Thanks, Chris. For more information on the Crested Butte Real Estate Market contact: Chris Kopf Previews® Property Specialist Coldwell Banker Bighorn Realty Phone: (970) 209-5405 email:  chriskopf@bighornrealty.com &nbsp; Author: Chris Kopf &nbsp;