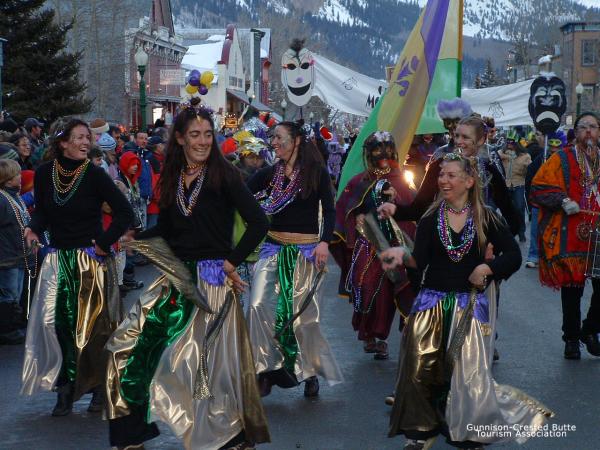 New Orleans may be the top destination if one wants to join in all the Mardi Gras festivities, but did you know that Crested Butte, a mountain peak off the Elk Mountains located in Southern California, holds its own carnival celebrations during Fat Tuesdays?

This year, KBUT presents its annual Mardi Gras celebration that features parades, floats, and silent disco parties down on Elk Avenue in downtown Crested Butte. Don’t let the town’s small population of 2000 fool you– they do know how to join in the fun and celebrate Mardi Gras in true Buttian style!

This February 12, 2013, head on down to Elk Avenue to watch all the festivities from the sidelines. The fun starts at 5:30 PM. You can also create and register your float for the street parades. You may fill out the registration form and register for free here.

People often ask me “what makes Crested Butte special?”  It is hard to put into words, but events like the Mardi Gras Parade in historic downtown Crested Butte, and festivities is part of the charm of Crested Butte for visitors, locals and second homeowners.  There are plenty of affluent second homeowners and luxury homes and high-end ski-in / ski-out condos at the base area, but unlike some of the other ski resort towns in Colorado that have their glitsy roots in gold and silver mining – Crested Butte was as a coal mining town.  In many ways the character and attitude of the early ranchers and miners has transcended time.  In Crested Butte the skiing is great, the scenery is awesome, the recreational activities in the Gunnison Valley are endless, and the fun parades and events combined with the  friendly community makes Crested Butte special.  People chose to come here for all of the above – but also because there is no social page, this is a place to kick back, getting dressed up is put on a new pair of jeans, and the focus is on relaxing, community, and fun with family and friends. 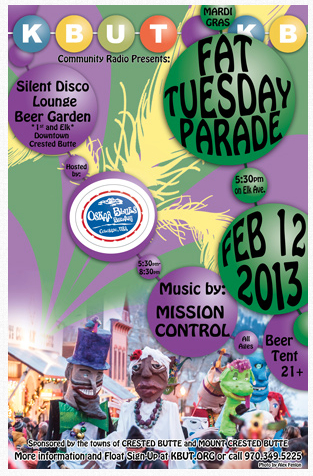 Mardi Gras refers to the Carnival celebrations that take place on or after Epiphany and the day before Ash Wednesday. Mardi Gras is French for “Fat Tuesday”, because it is tradition to eat rich, fatty, and greasy foods before fasting for the Lenten Season that will take place right after the celebrations, marked by Ash Wednesday.

The origin of the Mardi Gras can be attributed to the ancient Romans celebrating Lupercalia, which is similar to the Mardi Gras circus-like traditions we see at present. It was first celebrated in America in 1699, specifically 60 miles south of where New Orleans is today.

Street festivities that take place in the United States, South America, some parts of Africa, and in Europe are a sight to behold. Most people wear masks, costumes, and attend colorful street parades.

Conventions, street dancing, performance art, sports competitions, and other carnival-like activities take place during Mardi Gras, attracting more and more participants every year. The traditional food during Mardi Gras is pancakes, as well as other breads and pastries made with sugar, eggs, and fat.

Mardi Gras Celebrations Around the World

Mardi Gras is the most important day of the year in Belgium. The festival is highlighted by 1000 dancing gilles, the main participants of “Carnival of Binche”. In South America, especially in Brazil, Mardi Gras is referred to as Carnaval, and is considered one of the country’s famous Brazilian holidays. 70% of tourists flock to the country’s capital of Rio de Janeiro to join in the Mardi Gras festivities. Similar celebrations take place in Italy, The Netherlands, Germany, and in Sweden.

Though not all states and cities in the United States celebrate Mardi Gras, it is clear that the festival has been embraced by so many Americans. New Orleans is famous for hosting annual Mardi Gras festivals that attract a lot of visitors from all over the United States and the world. Street parades, confetti, masks, costumes, floats, and carnivals occupy the streets of Louisiana, New Orleans’ capital city.

Mardi Gras is definitely a festive occasion that brings together history, religion, and celebration. This is one of the reasons why more and more people flock on to the streets to celebrate Mardi Gras.

The Crested Butte celebration on Fat Tuesday and the Mardi Gras Parade in historic downtown Crested Butte is yet another reason people quote: “Crested Butte, Colorado’s last great ski town”, and a part of the charm of Crested Butte for visitors, locals and second homeowners.

If you have an interest in Crested Butte Real Estate and would like to start a conversation about homes, condos or land in the Crested Butte area, call Chris Kopf, Previews® Property Specialist, Coldwell Banker Bighorn Realty, 970-209-5405 or chriskopf@bighornrealty.com, http://chriskopf.com or Contact Chris