For 2 days there are crews bringing in snow and building 2 huge ramps on Elk Avenue between 2nd and 3rd Streets.  One ramp is the take-off ramp, then there is a big gap of about , and the other ramp is the landing ramp.  On Saturday night from around 7:00pm to 10:00pm there are jumpers launching Big Air on Elk…

You may be wondering how the skiers and snowboarders are able to launch themselves high in the air when Elk Avenue in Crested Butte is Flat? Good question.  These daredevil big air launchers are pulled via a tow rope by a hyped-up snowmobile.  They go from 0-50 mph in about a stretch, hit the ramp, let go of the rope and get launched into the night sky where they spin, flip, tuck, grab and sometimes flail until gravity brings them down again.  If the jumper and the snowmobile driver are synced up and all is good the jumper will land on the descending ramp.  But if there was not enough mo-jo the jumper could hit into the landing ramp – not good.  If they over juiced it, the jumper will fly past the ramp and land hard on the flat snow – also not good.

Spectators line the street, are on rooftops and hanging out windows to catch the action.  This is a competition and the competitive jumpers are scored on multiple jumps for acrobatic flair, and landing upright.  The announcers pump up the crowds and announce the competitors and also provide some insight into what tricks were just performed.  It is all goobbly goop to most with the announcer saying stuff like: “WHOA! Did you see that cab 1080 double cork frontside indy into a rusty trombone!”  The reaction from the fans is a load “ROOOAAAAR!” upon a successful landing and equally loud “OOHHHHHHH!” when the competitor does not land upright.

If you can’t make it to Crested Butte to watch in person be sure to watch it live on-line on Saturday March 7, 2015 – you can watch on-line at:  theskichannel.com

Corey Tibljas of Two Plank Productions is putting on the Event this year, and Corey knows a bit about athletes launching themselves into the air – he grew up in Crested Butte, and his local Crested Butte company Two Planks Productions has produced many ski films with footage from around the world! 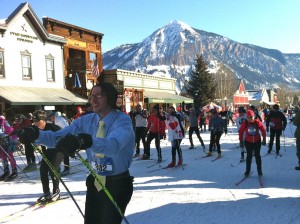 People often ask me “What makes Crested Butte special?” It is hard to put into words, but Big Air on Elk is part of the charm of Crested Butte for visitors, locals and second homeowners. Coined “The last great Colorado Ski Town” Crested Butte offers a variety in events and festivities throughout the year.  There are performing and visual arts, plenty of outdoor recreation, miles of mountain beauty, a historic downtown, a great ski resort, and a warm community. There are plenty of luxury homes and high-end ski-in / ski-out condos at the base area, but unlike some of the other ski resort towns in Colorado that have their glitsy roots in gold and silver mining – Crested Butte was as a coal mining town. In many ways the character and attitude of the early ranchers and miners has transcended time. In Crested Butte the skiing is great, the scenery is awesome, the recreational activities in the Gunnison Valley are endless, and the people are warm, friendly and real.

If you have an interest in Crested Butte CO Real Estate and would like to start a conversation about homes, condos or land in the Crested Butte area, call Chris Kopf.