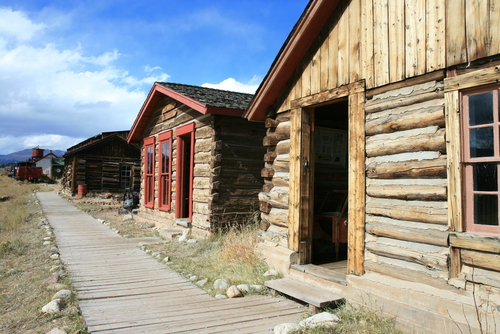 Sponsoring a museum did not become a reality until 1963 when the Adams and Wilson families donated land to be used for the Pioneer Museum. By 1964, operation of the museum had begun. The Pioneer and Historical Society has a ten person governing board, a curator and approximately 60 volunteers.

The museum is not sustained by any county, state, or federal monies. Memorials, donations, yearly dues, and revenues from the summer months enables the museum to pay for insurance and upkeep. Local residents help out from time to time with labor, materials and equipment on bigger projects. The yard maintenance worker is the only paid worker.

The museum’s grounds, buildings, artifacts and memorabilia make up the many displays which have been donated by generous members and friends of the Society. Most of the items on display date back to the early settlers. The museum’s collections truly represent the cultural history and heritage of the people of Gunnison County.

Some of the Fascinating Attractions & Exhibits at the Museum

This building was constructed in the spring of 2000 in order to house a very prized collection of 25 antique cars in mint condition. Mr. Andy Mallett’s donation, which he restored himself, originated in Delta, Colorado. In addition to Mr. Mallett’s collection are vehicles from the Gunnison area, donated or on loan from local residents.

In 1975, the Irby family of Sargents, Colorado, donated this building which was located on their ranch. It contains railroad artifacts and memorabilia, telegraph equipment, photographs, traveling trunks and a display of the stationmaster’s quarters.

The tower was moved to the museum site from Mears Junction, Colorado. It was located on the east side of Marshall Pass and was filled with 50,000 gallons of water. The water was hand-pumped from a well or hauled from a nearby creek or spring. The tower was moved in 1971 and erected on site by the Bill Endner family.

“Cinderella” was built in 1882 by Baldwin Locomotive Works and was used for 73 years in the Gunnison area. Only three narrow gauge trains remain of the 150 C-16 model engines built. This engine has been on display at the Chicago Railroad Fair, “Rush to the Rockies Centennial,” and in the film “The Denver and Rio Grande.” The engine made its official final run on September 28,1954, from Sapinero to Gunnison. On June 30, 1955, this engine was used as a workhorse in pulling up the railroad tracks in the Gunnison area.