I recently got the opportunity to talk with Dave Ochs – Executive Director of the Crested Butte Mountain Bike Association (CBMBA). Dave and others have been working hard to secure Fat Biking trail easements, and are now grooming over 30 miles of Fat Bike trails in the Crested Butte area.  Thanks to the Forest Service for their approval of the grooming plan.

Crested Butte Winter Fat Bike –  If you have not yet taken a spin on a Fat Bike on the snow then you are missing out. The good news is that at the end of January the world of Fat Biking will descend on Crested Butte for the Fat Bike World Championships! 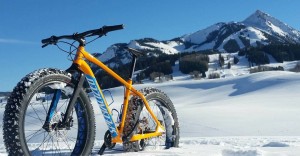 Fat Bikes Catching on – Look around Crested Butte this winter and you will see Fat Bike enthusiasts and Fat Bike trails everywhere.

Last year during my annual Crested Butte Boys Ski Trip for fun we decided to rent Fat Bikes on Sunday morning prior to the group’s departure. It was a beautiful day, and we rode out Gothic Road and took in the awesome morning views overlooking the East River valley 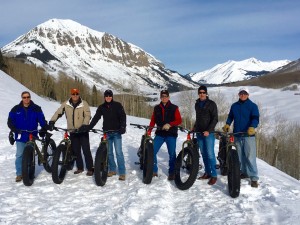 floor.  Everyone said “wow that was great!”, “…glad we did that”.  Maybe because I had never biked on snow before – but I actually found myself laughing out loud.  A fun new mode of transportation and recreation in Crested Butte – FUN!

Fat Bikes on the Groomed Ski Slopes – Kudos to CBMR for getting ahead of the curve and allowing fat bikes on the mountain (not when the lifts are spinning) to join the uphill climbing/skiing crowd in the mornings and afternoons.

Fat Bikes in Town – there have long been winter bikers in Crested Butte with studded tires and now the Fat Bikes are becoming more popular. If you deflate the tires a bit you can get even more tire surface area.

Fat Bikes in the Summer too? – CB local John Norton said that during his last trip to Moab “…all the top riders were on fat bikes – they are great in sand and loose dirt, roll over everything and because you go slower are safer”, (he is currently on the mend from a recent fat bike crash). John is also the Executive Director of the Gunnison-Crested Butte Tourism Association and given the 750 Miles of Trails in Crested Butte & Gunnison he is bullish on promoting the Gunnison Valley as a Mountain Biking Mecca! They have also been instrumental in creating a supercool interactive trail map website and mobile app – go to http://mtbhome.com. Yes you can ride a Fat Bike on all of the trails in the Summer!

People often ask me “what makes Crested Butte special?”  It is hard to put into words, but the I think  you would agree after watching Video Interview Dave Ochs Crested Butte Fat Biking that Fat Bikes are going to make it into the mix and will provide visitors one more cool experience. With endless open space and recreational opportunities your adventures in Crested Butte are limitless.

No matter where your home is in Crested Butte you are less than a few minutes to a mountain bike trail!  There are plenty of luxury homes and high-end ski-in / ski-out condos at the base area, but unlike some of the other ski resort towns in Colorado that have their glitsy roots in gold and silver mining – Crested Butte was as a coal mining town.

In many ways the character and attitude of the early ranchers and miners has transcended time. In Crested Butte the skiing is great, the scenery is awesome, the recreational activities in the Gunnison Valley are endless, and the people are warm, friendly and real.  Come to Crested Butte, ski, hike, drive a car on the ice, ride a fat bike…, then go find a restaurant, bar or shop in town. Sit for a while, relax and enjoy striking up a conversation with a new friend – it could be the beginning our your journey of adventure.