Most people only dream of catching a 32″ rainbow trout – Wilder on the Taylor homeowner Mike West has realized that dream!

Mike was so excited – he texted me photos of the enormous fish that afternoon. When I spoke with him he recanted the fish story –  “you won’t believe it!” he said. What stuck in my mind was:  “…it took took 40 minutes and 400 yards of river to land that trout!”  Wow. I had the opportunity to represent Mike and Tiffiny West when they purchased their riverfront home site at Wilder on the Taylor a few years ago.  This Summer they completed their 2,000 sq. ft. guest home on Lot 9 at Wilder on the Taylor.

From I don’t want to See Wilder, to I have realized my dream  When I first met with Mike and Tiffiny to talk about their vision of their dream home – what Mike was describing to me was a beautiful spot on a river where he could see and hear the water – and see trout rising from his deck (they had not even settled on Crested Butte and had been looking in numerous areas in the Western US).  I suggested Wilder on the Taylor right here in the Crested Butte area and Mike immediately said” “no – I have seen it.”  I asked how since there was a gate with a code to get on the ranch?  He said: “well I saw it from Taylor Canyon Road and Jack’s Cabin cut-off.”  My reply: “well – you have not really seen the ranch and certainly have not experienced it.”  I brought Mike out to Wilder to tour the property and set-up a fly fishing guide – his response was overwhelming excitement.  He said: “Now we have to convince my wife Tiffiny that this is the right place for us.”  Well it did not take much convincing – once Tiffiny got out of the truck and walked toward the Taylor River she was hooked.  Their next task was to select the perfect home site to build their dream home.  Mike said: “I have waited 15 years to get to this point – I am ready, this is perfect.  We look forward to creating memories for years to come.”

They have enjoyed hosting family, friends and clients at Wilder on the Taylor.  They utilized the four guest cabins on the banks of the Taylor River while they completed the plans for their home and until construction was completed early this summer. 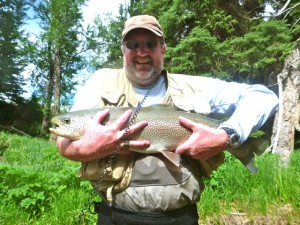 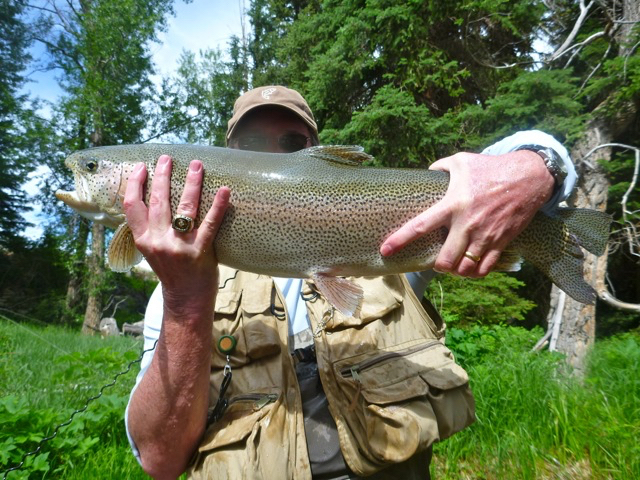 Mike always knew he would create lots of great memories at Wilder on the Taylor – and now he has a real fish story to add to the list! The State of Colorado record for a Rainbow Trout is 40 1/4″ – caught on the Taylor River.

The Colorado Division of Wildlife posts all the fish state records on-line Read the tale from Wilder on the Taylor Master Fly Fishing Guide Lu Warner. Click the image of the Gunnison Times article or A REEL FISHING TALE to read the article.